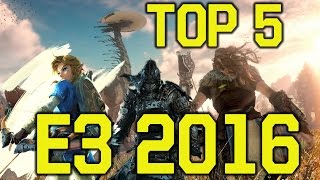 I'm back from e3 2016, where I saw some amazing games what games well. This is my top 5 of III 2016 games. Not only that I played but also games that I saw. Let me know yours, any comments down below and don't forget to hit that like button.

As you probably know, the PlayStation press conference was insane. It all started with a real-life orchestra that plate and then this guy coming out of the shadows go to ours back and now, as a third person action game, I mean it looks like that.

I really got the thumper 805 by watching a game play and the combat look more like an action RPG than a hacker slash game. Some may say that they don't like to break away from the traditional shower, but we get a more emotional and impactful story in return.

I'm all for it. By the way I can't wait to fight this dragon speaking of dragons. Well, let's, a cyborg dinos. I want to hunt them in horizon zero dawn man. The game looked amazing. Thanks to e3, we saw some awesome new gameplay, and then it will be a more rpg-like game with an answer wheel and a gear system.

Normally, the combat in these types of games is not that great, but the fights in a rise in seara dog look really. Epic, if you combine this with the amazing world and enemies and a mysterious story, I think we have a winner here when the game will launch in February in the US and march.

First in Europe, I love heavy rain and i also like beyond two souls. So, yes, I'm, a fan of developer Quantic Dream, seeing the new footage from the new game. Detroit made me even more hype. They're, not a lot of interactive storytelling games like this, and I love myself a future setting if they can really build on the things they learn from heavy rain.

With a multiple character support any awesome set pieces we can explore in their games. I think Detroit has a chance to be my favorite game of 2017. If for honor, does not disappoint? Oh, but I doubt it at this year's e3.

I got to play the campaign mode in this sword. Fighting action game from Ubisoft. I learned that there is supposed to be a lot of content like a PvP mode, a single player campaign mode and also a PVE mode, although they did not share any details on the latter one.

It was awesome to wield a sword again and learn about the multiplayer play styles. This game will feature in the different three factions biking summarized and nights. The gameplay remains super interesting where you really have to analyze the enemy and think about your next move.

The campaign was entertaining and serves as a great training for the PvP mode, where I will spend a lot of time. Ok, zelda is an RPG now, and I love that scene. Weapon drop from enemies with different stats and being able to explore an open world was amazing during my play session.

It will discard of empty yes, but there was always something to do or walk towards their caps of goblins that you can clear with a reward at the end, their mysterious buildings and random enemies. That pop up at night, when I saw the text.

Thank you for playing. I didn't want to leave the Nintendo boob cell. That was my most awesome play session of e3 2016. So yes, also my favorite game of a tree. This year I can't, wait to play it on and next because the wii, u version a place, did not look good and suffered from some framedrops.

Hopefully, this will not be the case on nintendo's new platform conclusion I can't wait for 2017. All the games are just listed will release next year. I think maybe go to war will slip, but i think this will be a solid pick for a holiday 2017.

Anyway. Let me know your top five III 2016 games in the comments down below like this video. If you did subscribe for way more awesome, gaming content, more III, stuff coming up and also some other stuff, which i can tell you yet anyway, thanks a lot for watching.

I will speak to you next time. Goodbye