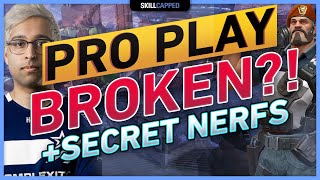 Hey everyone and welcome to another Valorant News breakdown by skill-capped.. We got some absolutely insane news to cover today. The pro player ShaHzaM, having a hot take on the current state of the pro scene.

Brimstone got hit with some secret nerfs that are actually game. Changing. And a # 1 ranked player in EU and pro player was banned for cheating. Trust me, you're, not going to want to miss this one. Now for our question of the day.

. If you could make one change to Valorant any change, you want, what would it be For me personally? It would be hard to pick just one.. You have improvements to ranked nerfing the run and gun accuracy on the stinger and frenzy, just to name a few.

. However, if I could change one thing, it would be to have more maps.. I personally feel that Valorant doesn't, get a ton of new content and can feel a bit stale at times., And I've noticed that the introduction of new Agents, hasn't always had the impact that I originally Thought it would in terms of keeping things fresh.

. However, new maps have always made me the most excited and re-invigorates my interest in the game whenever they're released.. But let me know what you guys think., If you could make one change to Valorant.

What would it be? Let us know in the comment section below as we read them all and would love to hear the communities thoughts., Alright, so jumping into our first story and it's. A juicy one., The pro player and streamer ShahZaM, recently expressed his thoughts on pro play on his stream and it absolutely blew up online.

To give some context. Shahzam plays for the pro north american team Sentinels, who recently lossed to LG and Immortals in the VCT tournament, and he decided to respond to some criticism that his team lacking strategic depth caused them to drop these games.

. Let's, check out the clip. Twitch, So yeah, some strong words, and this obviously got people talking and a lot of the discussion started to take the narrative of North American pro play compared to European pro play.

. For those of you who don't know keep up with the pro scene. There's, been a trend throughout Valorant's, short history of North American teams, running more duelist heavy compositions and playing a more scrappy, full burst onto site and look to win the aim duels.

. However, in Europe there's, always been a trend of more innovation in team compositions and strategies., And so in many ways. Yeah ShahZaM is kind of right in that we're, seeing this heavy gun fight meta in the pro scene, but that's, more more predominant in North America.

. To give you some context in the last major tournament, First Strike Europe pioneered the Viper pick on Icebox and Bind as well as bringing Brimstone to Bind prior to his buffs.. At the same time, the European team that won that tournament Team Heretics used high level default strategies and rotations to take that win, along with being the only major team to run Sage in all of their compositions.

. In comparison, North America typically ran Omen and Jett on all maps, backed up by more heavy duelist picks like Phoenix, Reyna and Raze.. In terms of how this all applies to the more casual audience well in all ranks, duelist pick ups are becoming more and more popular.

. This does make sense, given that a lot of the utility agents like Sage Omen, Killjoy and Cypher all have received nerfs, while a lot of the duelists have remained unscathed.. But what do you guys think Is this a product of Valorant's, balance choices or is it more North America's? Reluctance to innovate with more strategic, focused play.

? I'm curious. What you guys think And remember if you want to improve fast, win, more gun, fights and get the rank you've, always wanted than there's, nothing better than our hyper improvement system at skill-capped.

com link in the description below.. It's there, you'll, not only find over 700 premium, valorant guides organized in structured courses that are easy to follow and optimized to help you improve as fast as possible.

, But we also have an expanding library of live. Smurf commentaries. A feature no on else offers.: These are by some of the top valorant players breaking down how you, too, can climb out of every rank in valorant, ranging from Iron to Diamond.

. All of this can be unlocked with no risk with our rank improvement guarantee. So click the link in the description below head to skill-capped.com and get the rank you've, always wanted., Alright. So for our second news story, there was actually a huge nerf to Brimstone and Jett smokes that shipped on patch 2.

02 that flew completely under the radar.. In the patch notes, Riot said, they & quot fixed an issue where various abilities did not work inside Brimstone and Jett's smoke even when they were visible to their target & quot.

Now, due to how this was phrased, players didn't know exactly what this meant, but now that the patch is live. What players have realized? Is that abilities like Raze's Boombot and Sova's, Recon bolt, which, prior to this change, could be dodged by hiding in these smokes now will spot any enemies trying to hide from them in the smokes.

. What caused a lot of confusion was the fact that this change was listed under the bug fixes category of the patch notes. Despite most players, not thinking this was ever a bug and instead was just a tactical feature of smokes.

Themselves., A Riot dev responded to this saying & quot. This is correct.. These abilities don't completely negate the smoke they just see the same way a player does inside the smoke ( instead of the smoke completely blinding them ).

A sonar dart inside of a smoke will not reveal you if you are outside it and vice versa. But if you are both inside of the smoke together, it can reveal you. & quot. Basically, what this means is, if you're in the smoke with the ability it's, going to spot you now.

. This whole issues also shared some parallels with their recent flash changes.. For those of you who don't know in the last patch Riot changed the visuals of the flashes. Again, this change was included in the bug fix section, causing more confusion.

The developer added & quot This and the flash VFX changes were in the Bug fixes section this time around and could have probably used some more explanation around our philosophies behind them, similar to the ‘normal’ balance changes we shipped & quot, So yeah.

Definitely some big changes and not at all. What I would think would be included in a bug fix section of patch notes, but it looks like Riot learned their lesson and will improve how they communicate these changes moving forward.

And for our final news story of the day, a former # 1 Ranked EU pro Player was actually banned for cheating.. This story is actually even crazier than it sounds at first.. So in a translated, tweet Riot announced that & quot.

As a result of the evaluations made by the Riot Games fraud protection team, it was determined that Nisay was cheating in a ranked match and was banned from all official Riot Games organizations for 12 months.

& quot, So the pro team he was on immediately dropped him. After this announcement so far a normal response., But here's, where it gets crazy, Nisay, actually posted a twit longer, which obviously had to be translated where he said & quot, I’m, not so stupid enough to cheat.

Just because I am Radiant in a competitive match & quot & quot, When we asked them what 3rd party software etc. would you show us evidence, we are under community pressure and they said they would not.

. I personally think I have been wronged & quot & quot. If they had actually detected that I was cheating, a permanent ban would have been applied & quot, So Nisay is requesting. That Riot gives out more details of his ban, what detected it and what cheat was used.

And so far Riot hasn't responded to this as well.. For those wondering why Riot wouldn't just immediately release the details., It's very common practice when it comes to combatting cheats to try not to release any details on how cheats were detected.

. This is because, if you tell someone how you caught them, cheating well, a bunch of cheaters will learn from that and come up with a new way to circumvent the system.. It's, basically a constant cat and mouse game, and so it's standard procedure for game companies to release very little details around bans.

. There's, a good chance that Nisay knows this. So by asking for Riot to release the details and to imply not releasing the details means something shady is going on could be more of a way to try and spin the narrative in his favor than him actually wanting the info.

But who knows it's all speculation.? In the end, it's kind of funny. How one of his main points is that if he was truly cheating, they would have banned him for longer.. My personal opinion is that his ban did seem kind of light.

I mean only a 1 year ban for cheating seems a bit on the low end, especially with so much drama. Recently around cheating in fps games. You'd. Think Riot would want to set examples and give harsher punishments early on in the Valorant esport scene.

. I guess it's possible that they only caught him cheating in 1 game and so that's. The reason for the lighter punishment., Maybe if he was caught cheating in far more games, they would have dished out something much harsher.

. We don't really know though., But I'm really curious. What do you guys think is a fair punishment for someone caught cheating in Valorant? Do you have no tolerance for this kind of thing and would like to see a permanent ban or for first time offenders? Do you think something like a 1 year ban can be enough to send a message and prevent them from doing it? Again.

And remember if you want to improve fast, win, more gun fights and get the rank you've always wanted. Then there's, nothing better than our hyper improvement system at skill-capped.com check it out, link in the description below.

. Otherwise you know the deal like subscribe and hit the bell icon to keep up with the meta and get more premium guides with one goal. In mind, helping you become a better player.. We here at skill-capped, want to thank you for watching until the end, and we'll catch you in the next one.