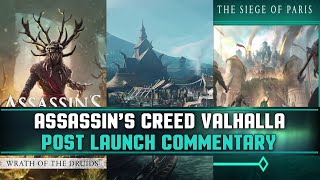 Loading [ Music ] welcome to access the animus, [ Music, ], hello, everyone and welcome to a new video here on access. The animus, as you might have seen on our channel ubisoft, has finally shared the post launch trailer for assassin's, creed valhalla, and we finally know about the content that will be available in the coming months, at least until fall of 2021.

With this video, we're, going to go through the new wrath of the druids and the siege of paris expansions available with the seasoned bass, along with the legend of beowulf, bonus, quest, the free seasonal content, the various new features and mechanics and the Final announcement of the discovery tour so without further ado, let's delve into the trailer.

We have a lot to discuss. The first expansion that will be available through the season pass via the gold or ultimate edition of the game, will be called wrath of the druids and will be available in spring 2021 taking place in ireland, and we can't stress how excited we Are about that, the expansion will be focused on a druid cult called children of danu, whose members will have to be hunted down and killed by the players.

More specifically in irish mythology, danu is a hypothetical mother goddess which is sometimes associated with the land. So we'll have to see if the story connected to her is more rooted in the beliefs of the local or if there's, anything related to the first civilization that might spice everything up.

The expansion will also feature dublin. As a bustling, metropolis and players will be able to influence its trading systems along with taking on ring forts. As far as what concerns us, we are actually interested in how players will be able to influence the trading systems, and, if that will leverage the mechanics of the settlement from the main game.

It's, not clear how much of ireland will be in the expansion, but the trailer did show a good number of locations already, along with the mention of celtic and darker tones. So we really can't, wait to see the expansion in action.

The second expansion will be called siege of paris and will be available in summer 2021 and will take place in paris during the famous siege that took place in 885 a.d. The siege will take place around 10 years after the events of the game, so it will be interesting to see how it will play out in the expansion.

Players will not only witness the siege, but also will see a new region franchia, which will hold some replayable activities where the player will be able to fight the troops of charles the fat. But they will also be able to infiltrate paris, which will probably lead into new stealth sequences.

They will also be able to create alliances which will very likely make use of the system from the main game and in general they will be able to conquer the city from within the trailer. Also showcased the legend of bellwolf mission again available through the season pass, which will be actually available at launch and will deal with some mysterious attacks and traces of mold that seem to be connected to the curse symbols in the world.

That was it for the paid content, but there was a lot more free content that was announced this time. The free content will be seasonal, so it will be released at the end of 2020 than in spring summer and fall of 2021 each time.

The team will also release the first new game mode called reaver raid, which will be based not only on the raid system, adding more risk than rewarding what was described as a different context, but also on the drums vikings, allowing players to create an entire crew of Them, funnily enough, this was a feature that was asked about in our comments recently so way to go.

Also, looking at the trailer, the timeline seems to go beyond fall 2021, so we may also expect some additional free content after that and lastly, producer jose araisa announced the return of the discovery tour for assassin's.

Creed valhalla. Another feature that several fans have been asking for in the recent weeks and months for those who might not know the discovery. Tour is a violence-free game mode that allows players to know more about the historical characters, events and locations shown in the game, actively learning history, while playing that was really a lot to share and it's very interesting to see how the team is Using a very different approach on the post launch formula, the seasonal content is: what struck us the most as it seems like there will be major drops of content, but pretty far from each other.

Then again, if you couple that with the expansions, we are sure that the players will have a lot to do for a very long time after they get the base game, and that was it for today's, video. What is the expansion or piece of content of the post launch for valhalla that you are the most interested in? Let us know in the comments we do know already that we can't wait to go to ireland if you enjoyed our video.

Please consider subscribing to our channel and turning the notifications on. So you don't miss any of our future updates. Thanks for watching and we'll see you in our next video. You